CarMD.com Corporation, a leading provider of car repair data and solutions, is pleased to release its 2015 CarMD® Vehicle Health Index™ Manufacturer & Vehicle Reliability Rankings. Unlike other industry reports and rankings that rely on subjective survey data, this is the only Index to offer an annual ranking of manufacturers and vehicles using statistically-based “check engine”-related failures and repair costs. These rankings are based on a combined average rating of fewest “check engine”-related problems and lowest repair costs for vehicles needing repairs over the past year. More than 251,000 reported in-use repairs that apply to an estimated 192 million Model Year 1996-2015 were analyzed to prepare this Index. CarMD recognizes that car maintenance and repairs are part of car ownership and reports on these findings to help consumers identify the vehicles with lower upkeep, while helping the industry stay abreast of year-over-year trends. This Index also ranks the top 100 vehicles overall, top vehicles by category and lists the most common repairs by make. Historical rankings are not necessarily indicative of future vehicle reliability.

Returning to the top spot after a one-year hiatus, Hyundai ranks no. 1, edging out Toyota (no. 2). Rounding out the top five vehicle manufacturers of 2015 are no. 3 Honda, no. 4 Ford and no. 5 Chrysler, no. 6 Kia, no. 7 General Motors, no. 8 Mazda and no. 9 Nissan. New to this year’s list of the 10 most reliable manufacturers is Volkswagen (no. 10), which ranks just above BMW, which is not on this year’s list. 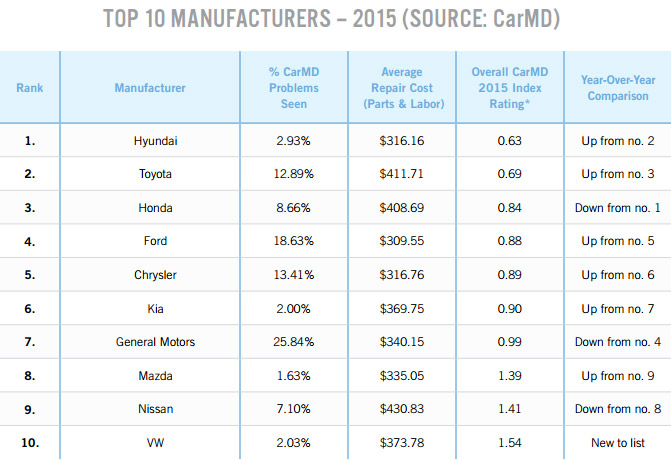 The lower the Index rating, the higher reliability ranking.

(Top 10 vehicle manufacturers based on model year 1996-2015 vehicles needing repairs between Oct. 1, 2014 and Sept. 30, 2015, and determined by the manufacturers whose vehicles had the fewest percentage of CarMD repair incidents combined with the lowest cost per repair, per number of registered vehicles on the road. Sources: CarMD.com Corp., with vehicle population data provided by R.L. Polk.) 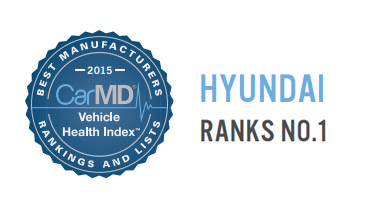 Five sedans, two compacts, one crossover, one minivan and one hybrid comprise this year’s top 10 list of most reliable vehicles, according to CarMD. The top 100 vehicles represent the best vehicles out of more than 3,800 different types of model year 1996 to 2015 vehicles on the road today, and the top 10 manufacturers represent the best out of more than 20 parent manufacturers. It is important to remember that even the 99th or 100th ranked vehicle on the list is a significant achievement, as this puts it in the top 2 percent of all vehicles being ranked. 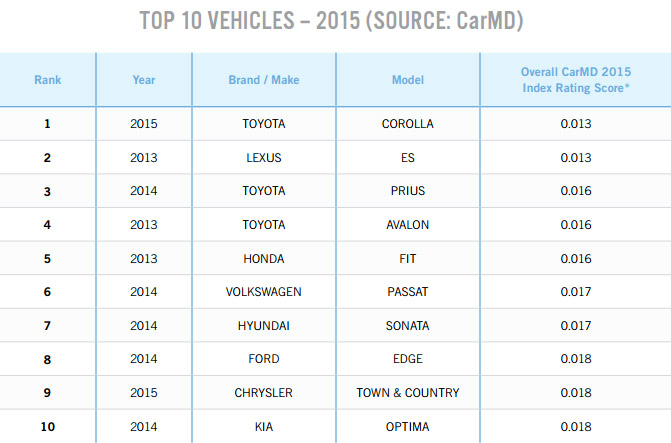 The lower the Index rating, the higher reliability ranking.
(Top 10 vehicle manufacturers based on model year 1996-2015 vehicles needing repairs in the U.S. between Oct. 1, 2014 and Sept. 30, 2015, and determined by the manufacturers whose vehicles had the fewest number of CarMD repair incidents combined with the lowest cost per repair, per number of registered vehicles on the road. Sources: CarMD.com Corp., with vehicle population data provided by R.L. Polk) 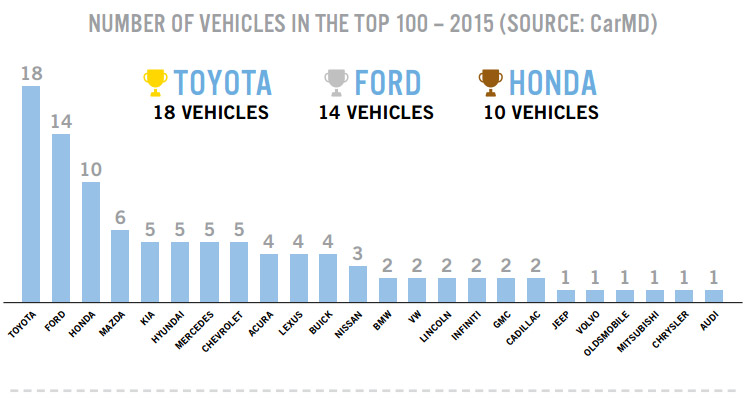 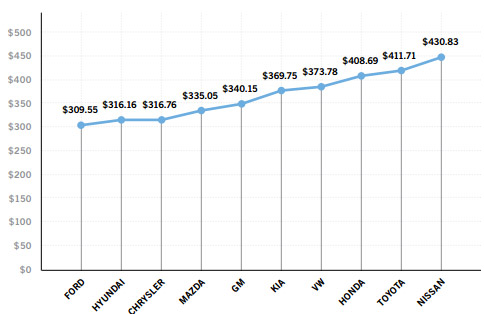 Different vehicle makes tend to have unique sets of problems and common failures. The CarMD Vehicle Health Index points out common problems by manufacturer, providing a helpful resource for vehicle owners as they maintain and repair their vehicles.

The following is a list of the top three vehicles by category in 2015 according to CarMD, which based its ranking on the vehicles with the combined fewest and lowest cost “check engine”-related problems:

No. 1-ranked Hyundai’s ranking is credited to a lower than average repair cost and very low repair frequency, meaning Hyundai owners had fewer trips to the repair shop as compared with other manufacturers.

Toyota, no. 2, had the third lowest repair incident rating and a 15 percent drop in year-over-year repair cost from $480 to $411, but is edged out by Hyundai’s slightly better overall score.

Kia, ranked no. 6, continues to improve having moved from no. 8 in 2013 to no. 7 in 2014. Kia is helped by a low frequency of repair needs with only Hyundai and Toyota having fewer repairs per vehicle population.

Nissan, which includes Nissan and Infiniti makes, no. 9, moves down one spot from its no. 8 ranking last year.

No. 10 is Volkswagen, returning to the top 10 after a one-year hiatus.

If you’re interested in more info on the current state of vehicle health, download the PDF below. What you see on this page is only about 10% of all the info we have to offer – don’t miss the rest!

Don’t miss out – get it now

(Top 100 vehicles based on CarMD diagnostic reports generated from Oct. 1, 2014 – Sept. 30, 2015, representing an estimated 192 million model year 1996 – 2015 vehicles on the road in the U.S., and determined by those that had the fewest number of CarMD repair incidents combined with the lowest cost per repair, per number of registered vehicles on the road. Sources: CarMD.com Corp., with vehicle population data provided by R.L. Polk)