SUMMARY:
Top Manufacturers
For the second consecutive year, Toyota is the no. 1 manufacturer in the U.S., based on a ranking derived from the fewest percentage of “check engine”-related problems and lowest average repair cost. Toyota earns the top spot with the lowest Index rating of 0.58, which is an improvement from its 0.67 rating in 2011 (the lower the rating, the better the overall ranking). Rounding out the top five vehicle manufacturers of 2012 are No. 2 Hyundai, No. 3 BMW, No. 4 Honda and No. 5 Volkswagen. Domestic manufacturers dropped out of the top five, with Ford moving from no. 4 to no. 9 and GM dropping from no. 5 to no. 8. 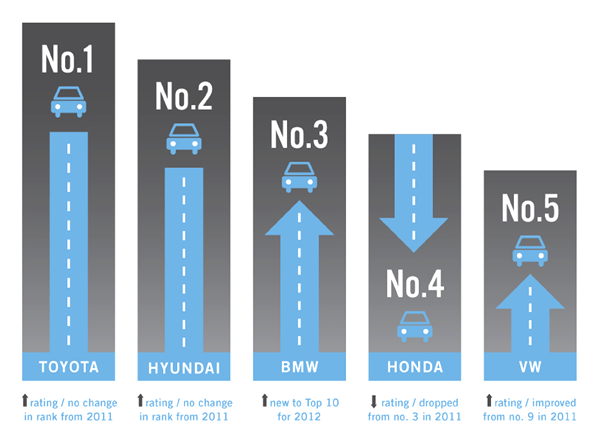 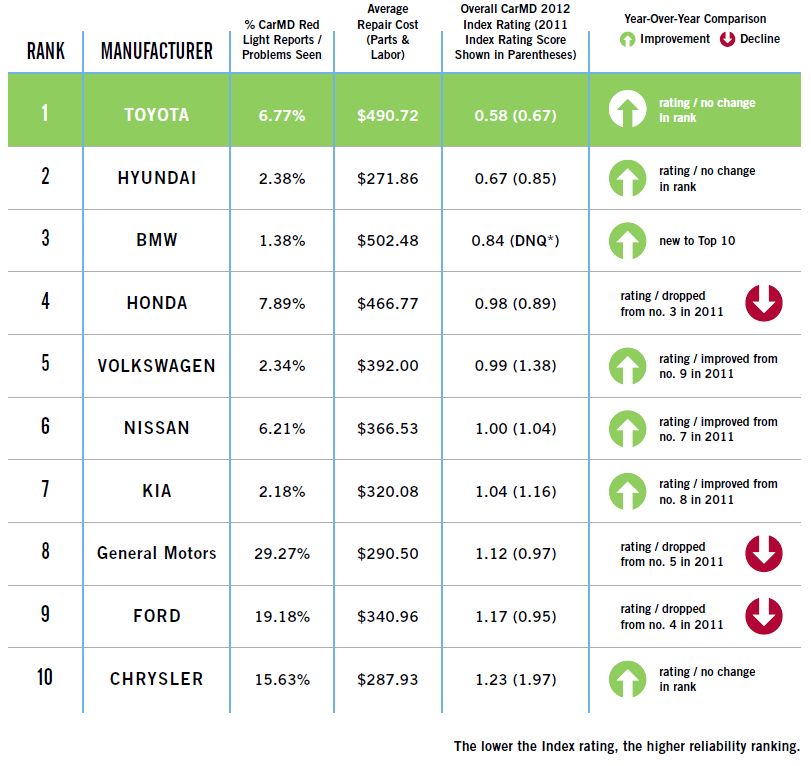 Overall, most of today’s vehicle manufacturers continue to improve reliability. 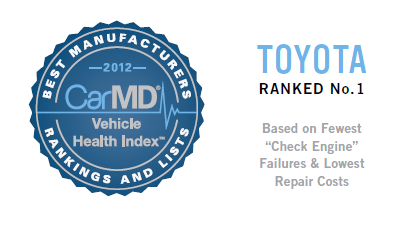 Hyundai had the lowest average repair cost among the top 10-ranked manufacturers ($271.86).

The manufacturer with the highest overall repair cost was BMW ($502.48); however BMW had a very low repair incidence rate, contributing to its no. 3 ranking among the top vehicle manufacturers for 2012. 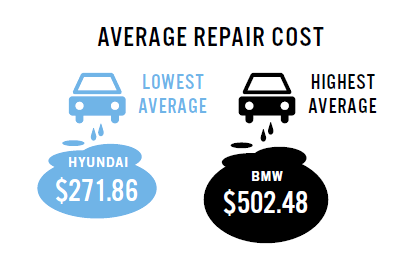 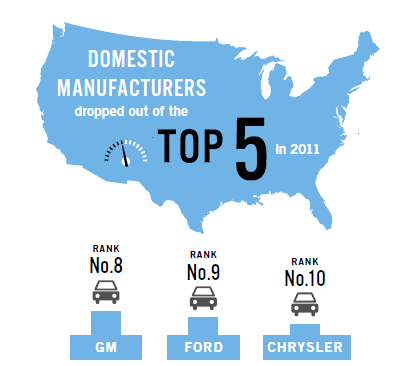 In 2011 luxury brands generally hurt their parent company’s score, with Buick and Infiniti the only outliers.
However, Audi, Buick, Infiniti and Lexus helped their parent manufacturers’ overall scores this year. Led by the 2007 ES350 (first in the Luxury category), Lexus’ rating improved yearover- year, and helped Toyota earn the top ranking for the second year in a row. Conversely, Acura, Cadillac and Lincoln hurt their parent brand’s overall Index rating in 2012. 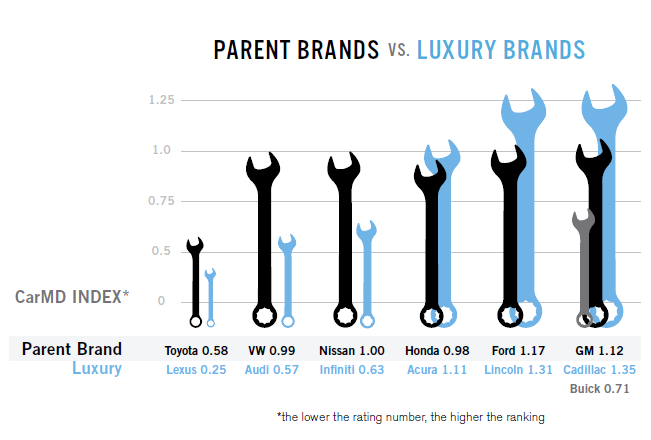 Sourcing the largest database of problems and repairs of vehicles on the road today, CarMD is able to provide fact-based transparency into a wide range of vehicles, including a combination of new and used cars and trucks. CarMD provides the only Index that allows consumers to statistically analyze how vehicles age, and see reallife data on trends related to repair frequency and costs for a decade of makes and models. New to the top 100 list this year are BMW, Dodge, Lexus, Mazda, Mercedes-Benz, Mini and Pontiac.

Four sedans, two compacts, two wagons, one SUV and a luxury vehicle make up this year’s top 10 list, with Toyota leading the pack with three vehicles (two Toyotas and one Lexus), including the no. 1 ranked 2010 Toyota Corolla. Subaru and Honda each have two vehicles in the top 10, followed by Ford, Hyundai and Chevrolet with one each. Seven of the top 10 vehicles are not only new to the top 10 list this year, but also new to the top 100 as well.

The CarMD® Vehicle Health Index™ also ranks the top three vehicles by category: Compact, Minivan, Sedan, Full-Sized SUV, Wagon/Crossover SUV, Truck and Luxury. This year marks the first time that a manufacturer earned all three of the top spots in their respective category, and it happened not once – but twice.

TO 10 MOST RELIABLE VEHICLES 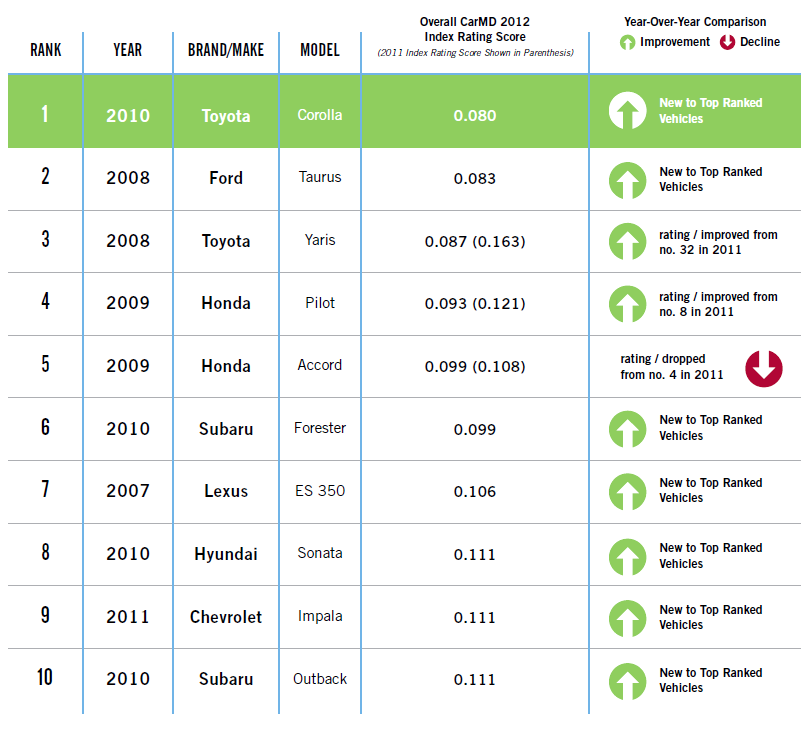 The top 100 most reliable vehicles represent the best vehicles from nearly 3,000 different registered vehicle types on the road today. 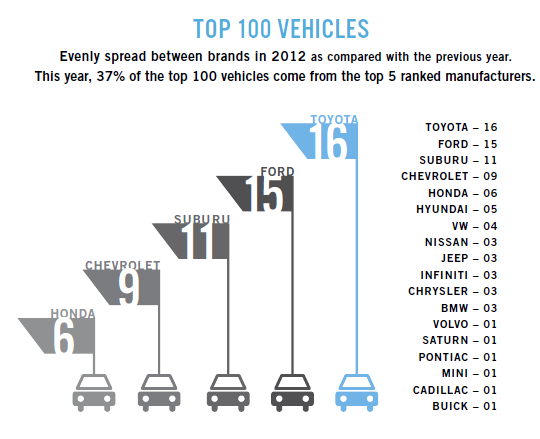 This year marks the first time that a manufacturer WAGON/CROSSOVER SUV TRUCK earned all of the top spots in their respective category, and it happened not once – but twice.

Two of the most well-known and established domestic vehicle brands beat out their competitors. The 2010 Chrysler Town & Country and 2010 Dodge Grand Caravan ranked no. 1 and no. 2 respectively among minivans and the 2008 Ford Taurus took the no. 1 spot for sedans. 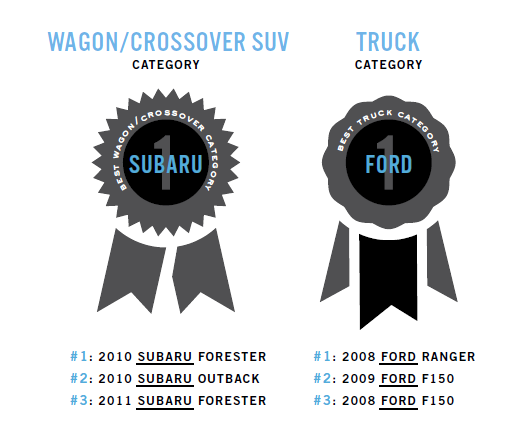 The top two ranked hybrid vehicles on the list come from Toyota. The 2009 and 2008 Prius rank no. 70 and no. 80 respectively. While the repair incidents for the Prius remain very low, its average repair cost is over $700, demonstrating how an extended warranty can make sense for hybrid shoppers as these vehicles age.

Strong scores on older vehicles demonstrate that as manufacturers improve vehicle longevity, it’s possible to have a healthy vehicle for 10+ years.
Some of the oldest vehicles in the top 100 are the no. 31-ranked 2005 Lexus ES 330, no. 59-ranked 2005 Mercury Grand Marquis, no. 93-ranked 2003 Subaru Legacy, no. 98-ranked 2004 Mercedes-Benz E Class and no. 99-ranked 2004 Toyota Camry Solara.
Subaru’s vehicles stood out for longevity; its 2003 Legacy and 2006 Outback are among the older vehicles in the top 100. With Subaru owners holding onto their vehicles longer than most, this explains why the most common repair on Subaru vehicles is “Replace Catalytic Converter” – a part that fails only after extensive wear and tear. 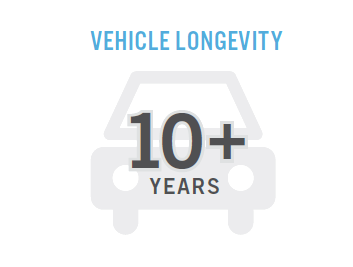 Different vehicle makes tend to have unique sets of problems and common failures. The CarMD Vehicle Health Index points out common problems by manufacturer, providing a helpful resource for vehicle owners as they maintain and repair their vehicles. (Details shown on pages 18-35). 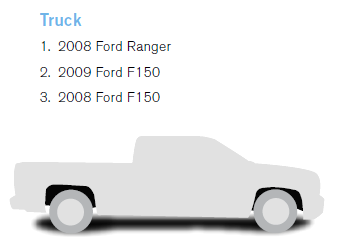 No. 1 Toyota, which includes Toyota, Lexus and Scion brands, had a very low incident rating (0.477) and low cost ranking.

Hyundai’s No. 2 ranking is attributable to the lowest average repair costs of any manufacturer and low Sonata and Santa Fe model scores, each appearing twice on the top 100 list: 2010 Sonata (no. 8), 2011 Santa Fe (no. 14), 2009 Sonata (no. 49) and 2009 Santa Fe (no. 74). Hyundai’s rise to the top tier of manufacturers can really be traced back to their engineering. Their vehicles are designed with Service and maintenance taken into consideration. This leads to lower average repair costs and greatly helps their scoring.

BMW debuted on the CarMD Manufacturer and Vehicle reliability rankings this year as the no. 3-ranked manufacturer. Previously, BMW did not meet CarMD’s minimum requirement for vehicle population, but with the sales growth of Mini, the manufacturer now qualifies. BMW includes Mini in its calculations.

No. 4 ranked Honda’s overall manufacturer Index ranking fell from no. 3 to 4 due to a slightly higher score of 0.98.

Ranked no. 5 Volkswagen enters the top five this year with an overall CarMD Index score of 0.99.

Ford, along with Honda and GM, declined in overall CarMD Index score and rating, dropping from no. 4 in 2011 to no. 9.

No.1-ranked manufacturer Toyota accounts for two of the top 10 ranked vehicles model year 2002 to 2012 and 18 of the top 100 vehicles (16 Toyota-branded vehicles and 2 Lexus vehicles).

Chevrolet ranks fourth among manufacturers with the most vehicles in the top 100 with nine.

Rounding out the brands with the most vehicles in the top 100 is Honda with six overall.

(The lower the overall CarMD Index score, the higher the rating. Top 10 vehicle manufacturers based on model year 2002-2012 vehicles needing repairs in the U.S. between Sept. 1, 2011 and Sept. 1, 2012, and determined by the manufacturers whose vehicles had the fewest number of CarMD repair incidents combined with the lowest cost per repair, per number of registered vehicles on the road. Sources: CarMD.com Corp., with vehicle population data provided by R.L. Polk)

(Top 100 vehicles based on CarMD diagnostic reports generated from Sept. 1, 2011 – Sept. 1, 2012, representing an estimated 136 million model year 2002 – 2012 vehicles on the road in the U.S., and determined by those that had the fewest number of CarMD repair incidents combined with the lowest cost per repair, per number of registered vehicles on the road. Sources: CarMD.com Corp., with vehicle population data provided by R.L. Polk)